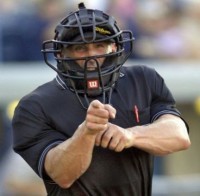 Ithaca Baseball is actively seeking umpires for the upcoming 2020 Cal Ripken spring season, which runs from April 22 to June 8. Games generally last about two hours and will start at 6:00 pm on most weeknights (Monday through Thursday) and at various times on Saturdays (as early as 9:00 am and usually no later than 4:00 pm). Rainout make-up games are typically played on Friday evenings and occasional Sundays as needed. Games will be played at Cass Park in the City of Ithaca and Tutelo Park in the Town of Ithaca.

The minimum age for umpires is 14 years old for the Cal Ripken Minors division (players aged 9-10) and 15 years old for the Cal Ripken Majors division (players aged 11-12). Potential candidates must be able to demonstrate knowledge of the game appropriate for the level of play. Ithaca Baseball will provide additional training before the season starts, including local league rules and an understanding of field positioning for all levels of play.

Umpires are paid on a per-game basis, and the rate will vary based on the experience level of the umpire and the age division of the game. Umpires will also be issued shirts to wear, and umpire equipment (mask, chest protector, shin guards, clicker) will be available in a storage area at each field.

If you are interested in becoming an Ithaca Baseball umpire, or have questions about it, please contact the Umpire-in-Chief at nab235@cornell.edu.